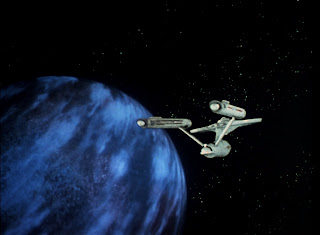 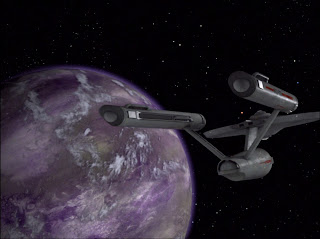 Got this just recently- and its been a revelation.
Not only because they've remastered the show by going back to the negatives, cleaning them up and doing a fautless transfer (although the frequent change of film stock and switching to soft focus is VERY obvious here and rather jarring).
Not only because they've replaced the somewhat ropey effects (seen now) with CGI equivilants - although you can thankfully choose between original or revamped versions of each episode.
But mainly its because, what with the endless movies and even more endless TV derivitives, i'd forgotten what a GREAT show it was.
Its been at least 20 years since i've watched any of Series 1 and its a real blast to re-discover them.
Best so far has been "What Are Little Girls Made of?", with the brilliant bad guy in Ruk, played by Lurtch off the Adams family, but also that indelible image of Kirk and a lump of clay on the ever rapidly spinning turntable, in order to make an android duplicate.
But next up is "The Corbomite Maneuver", my favourite ever episode.
Can't wait.
Posted by Mangamax at 12:37