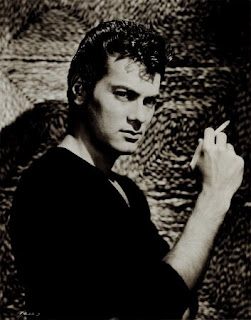 85 today.
Right after Captain Scarlet, he was who i wanted to be when i grew up. So much that it hurt. Especially if i had a dueling scar too.
Can't remember what order i saw his films in - it could've been "The Vikings", could have been "Spartacus". But i'm thinking it might've been "The Great Race" - a hugely over-looked gem of a film with Tony sending up the hero role something rotten. Can see that now but, like the Batman TV series of the same time, to a child its dead serious and thrilling and excitement and, boy, i SO wanted his all white suit.
Only as an adult can i appreciate what he was doing there.
Or that he took on the sidekick role in "Spartacus" 'cause he was mates with Kirk Douglas.
Or his brilliant Cary Grant take in "Some Like It Hot"
Or how he tore up the rule book by insisting his co-star in "The Defiant One's" by non-white.
Or his hint at greatness in "The Boston Strangler"
He's one of the very few Hollywood stars from back when they were true stars and, while i'm delighted he's still going, i fear the mark he made won't be recognised until he's gone. Tarantino - revitilize him quick.
I'm putting up a clip of "The Great Race" but the thing i now always think of when i think of him is being asked if he's worried that being married to a woman so many, many years younger than him would be bad for the heart, replied: "hey, if she dies, she dies".
Tony, you're a true giant.