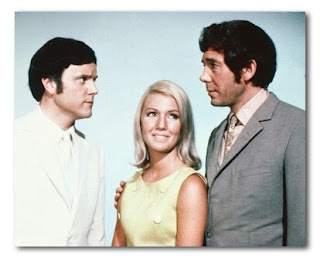 Sorry i've been away for such a long time but life, work, hobbies and me other Blogs have kept me away from you.
Anyway, been thinking what should i feature this time round and decided to go with something that made a HUGE impact on me back when i were a nipper.
Like so many things on telly back around the turn of the 60's into the 70's, they were just THERE for me. We never had a newspaper nor the Radio Times, so it was a case of chanel hopping (easy when there was only three) until you found something.
And seem to remember this was on a lot. Now, my Mum loved the ITC output - but only as long as it was a spy series. Anything with a wiff of fantasy she's turn off. So i must owe it to my big sisters having it on while my Mum was work.
As i say, like so many TV programmes, they were just there, with no idea of the background to the show, nor who made it, nor often what the heck was going on.
So i'd just watch it and let it wash over me. But this show affected me more than any other of that time or since and the thing i remember most of all about it is such a strong sense of sadness.
And i watch it now and its just the same. The plot might be serious, action packed, funny or just plain silly, things might be going right for Jeff(for once) or Marty's happy with Jeanie's life, it still doesn't detract from the fact the guy's desperately in love with his wife and just wants her to know he's there. But never can.
I found that incredibly moving even as a 9-year old and, now married with children, i feel it even more.
Of course, full credit goes to Kenneth Cope, who created a wonderfully funny, quirky character who, even when larking about, could give off an air of pathos without having to resort to clumsy dramatics.
The genius idea of the white suit helps immeasurably - but not as much as the opening titles. Forget Twin Peaks, or any other pretenders to the throne, these are still THE most haunting credits ever.