Scaring the crap out of a Sprog - part 6

I've just watched the Doctor Who tale "The Deadly Assassin" for the first time since its transmission back in '76. I remember two things about it from back then: (1) Not liking it because there were no spaceships or aliens in it, just a bunch of old Thesp's wandering round in dodgy makeup, (2) Being very disturbed by the Master in it. Not only by his hideous visage, but that it wasn't (and couldn't be) Roger Delgado. Looking at it now, its a terrific story and that makeup is just as horrendous as i remember it. I mean, really, thats pushing it for a kids show now, let alone back then: 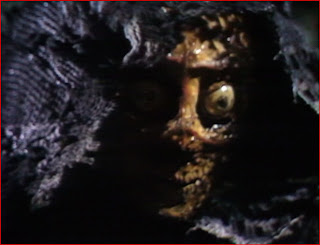 Watching it now, its quite striking how elements in the tale would appear elsewhere later> Biggest of course being "The Matrix" - a cyber reality that a person can be put under and enter, a cut-down Mauser pistol as a blaster - coincedece surely as Han Solo's must've been made and filmed at the same time, and the make-up for the Master's rotten face had a sort of American cousin shortly after with "The Incredible Melting Man": 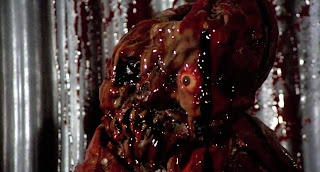