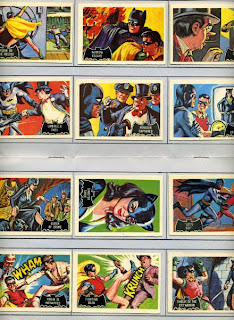 The movie version of the Batman TV series back in 1966 was the first film i ever saw at the cinema.
And i loved it dearly.
But, don't think i actually saw the show until the 70's. Up till then i only knew the show from the ads for it in DC comics and the brilliant bubblegum cards by ABC. It was the double whammy of being Batman to begin with, along with the fantastic painted art. How did i know the show couldn't possibly live up to what was being depicted on them?
Tell you a true story:
Such was my passion for the them that a "friend" called Christopher Deadman, who live the other side of a busy road from me, would let me have one of his spares each time i'd run from my side of the road to his, if i RAN IN FRONT OF A CAR. Two if it was a near miss.
True story and i did it because i wanted the cards so much. Would like to know where he is right now (last i heard, he was done for burgulary). Would be tempted to make him a dead man for sure.
Posted by Mangamax at 12:05