I Married A Monster From Outer Space 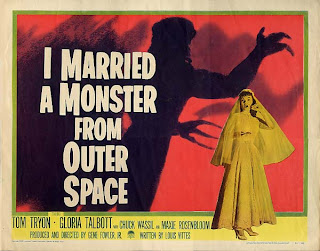 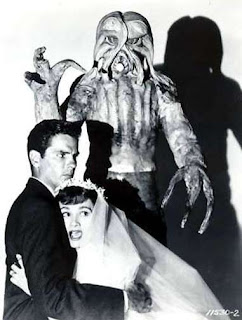 Sure we all have films that have stayed with us since first seeing them as a nipper, making an impression that stays until adulthood.
This rather cheap and unremarkable slice of 50's hokum is the unlikely winner of "most significent film i ever saw" for me.
Why?
Saw it one New Years Eve when i was about 8. We'd all gone to a social club and it was a pretty duff affair for a Sprog who wasn't into bopping around. But they did have a TV room - and this was on.
Looking at the film now, its pretty duff with only Paul Blaisdale's creature being the only thing of note. But to that 8-year old me it was the most terrifying thing i'd ever seen - up until that point i'd no idea that films could be scary. So that's one reason. The other is that it instilled in me a love of 50's B Movie Science Fiction, something that's stayed with me right up to now.
So, IMAMFOS, i salute you, naffness and all.
Posted by Mangamax at 00:07