Scaring the crap out of a Sprog - part 1 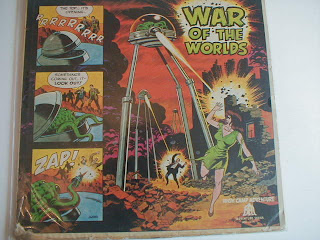 Think i got this record when i was about 7. Listening to it now, its a bit crap - set in a 60's American version of Victorian London with some appalling stagey acting.
But it was my first ever exposure to HG Wells and WOTW and made a profound impact, resulting in the book being my favourite of all time and the George Pal film my number 3.
As i say, pretty naff now. But... then and now, the noise the cylinder makes as it unscrews then falls off is one of the most disturbing sounds i've ever heard.
Posted by Mangamax at 06:19